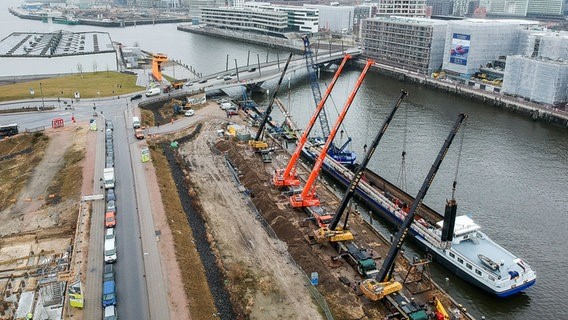 The HafenCity is currently Europe’s largest inner-city urban development project and includes the topics of sustainability and climate mitigation on multiple levels. The construction of the buildings in the western part of the HafenCity has already been completed – currently construction work is being carried out in the eastern HafenCity and the new district is growing steadily.

The HafenCity also wants to set an example concerning the energy supply in the new district: The waste heat generated by the Aurubis copper refinery will supply the new buildings in the eastern HafenCity with district heating in the future. Sulfur dioxide, a by-product of copper refining, is converted to sulfuric acid in the Aurubis plant, releasing almost CO2-neutral heat, which can then be used to supply the HafenCity.

The sustainable use of waste heat in this project with Aurubis and enercity (the energy supply company) will avoid around 20,000 tons of CO2 production each year. At present, the construction of the line between the copper factory and the eastern HafenCity is in its final stage. 2,400 of the 2,700 meters-long line have already been built, and the inauguration for the project is planned for October. Moreover, it will be possible to feed further waste heat from Aurubis into the Hamburg district heating network in the future.

The project is also gaining attention on an international level – a delegation of the INTERREG Europe project MOLOC visited the district heating plant in September and was informed about the specifics of the project and the current state of the development. The INTERREG Europe project MOLOC (Morphologies Low Carbon) deals with a sustainable urban development within the context of the energy transition. There are five partner cities within the project – Hamburg, Lille, Turin, Katowice and Suceava.